Why Play Beats Fun When it Comes to Serious Business 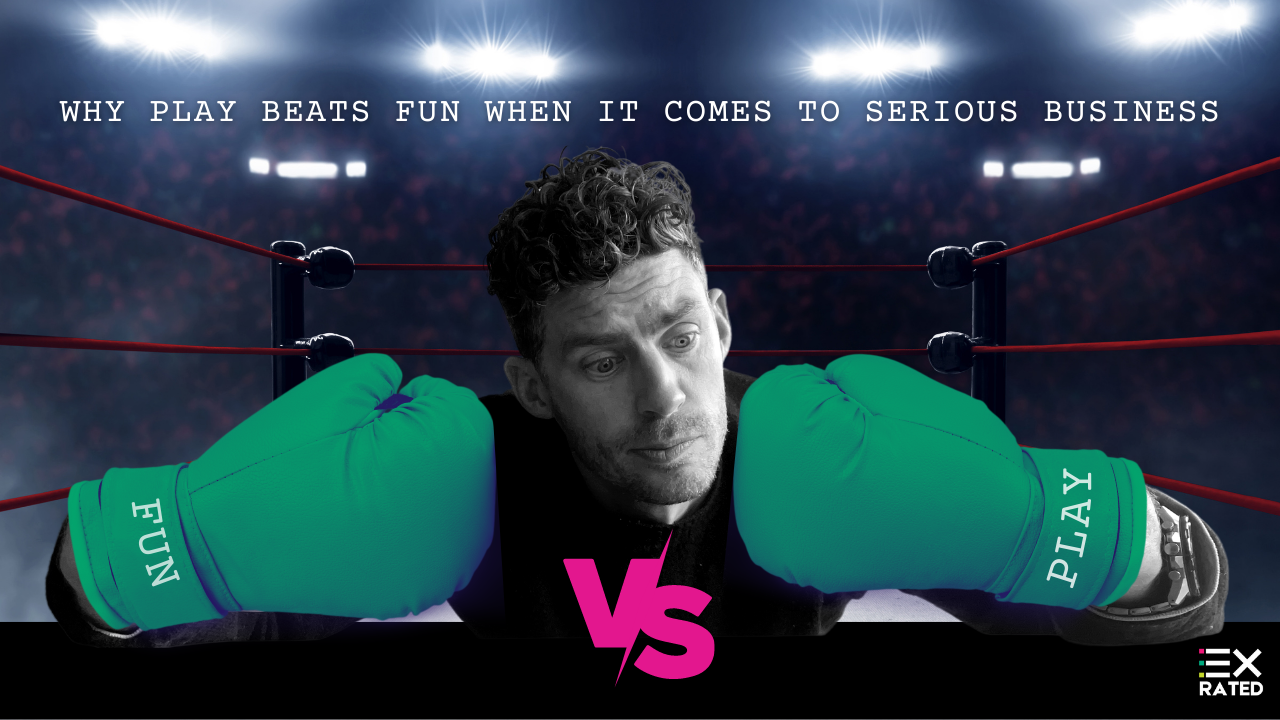 My ideal recipe for fun usually goes something like this; 2 parts running around, 1½ parts competition, a handful of creativity and sprinkled with an element of risk.

To others, like my 16-year-old daughter, that may sound downright horrifying. Fun, just like art is subjective, I often cringe when workplaces include fun in their values or worse have a fun committee. Now before you go labelling me as the fun police hear me out. It’s not because I think you shouldn’t be able to have fun at work, but the fact that fun is not always inclusive. There will always be someone who thinks the activity that the “fun committee” just organised is childish, lame, scary, intimidating or just simply an awful idea. Basically, the opposite of its purpose. That doesn’t mean you shouldn’t try to have fun at work, and if you are part of a fun committee don’t give up, just remember that fun, like this article is a matter of opinion.

Play on the other hand might be one worth considering.

Play, (not to be confused with games) is an amazing thing. Play is an innate behaviour that even in our youngest years we start to experience. Playing with objects, feeling their texture, tasting them, shaking and squeezing them to see if they make a sound or throwing them to see what happens. At first, you might argue that is just curiosity, but then if that was the case why would babies then repeat the process? It’s not repeated out of curiosity but because of joy. This does not stop at babies. Young children love going to parks, going on swings, slides, and sea-saws, which are not games and once you have been on them there is no mystery for curiosity to solve. And even without things like parks, play is witnessed in the simple act of spinning around to experience the sensation of dizziness. As adults, we exchange the humble playground for amusement parks. The rides are not games, there is no winning or losing and there are no rules other than empty your pockets of loose change and try not to vomit. Play is the act of engaging with the intent of experiencing joy in the present moment.

The noun is the verb, the verb is the noun.

Ok so we’ve established that play and curiosity are not the same things but, there is some crossover. Curiosity may drive us to initiate learning, but play is the teacher. Even in animals, we see play. Watch young cubs, lambs, kittens, and puppies. They play. They wrestle, play tug-o-war and tag. They are playing and learning life skills that will help them survive.

In children, it’s things like building blocks, colouring in and songs. The actions help build muscle function and memory. Play and physical activity are synonymous which is why it is so great for learning. Our bodies develop faster when we combine physical action with mental growth.

The homunculus man, an ugly statue that represents how we sense things. It has giant hands, lips, ears, and eyes. When we use all these senses, we rapidly absorb more information. It's why babies put everything in their mouths. They are using as many senses as they can.

Adult academic learning has relied on only a couple of these senses for a long time. Seeing and hearing. Is this why apprenticeships are shorter than a master's degree? Because you could argue that the content and skills are equally as challenging and complex, so is it because people learn faster when there is a hands-on element. Without engaging all our senses, we do not learn as fast, and play is great at getting all the senses involved.

Play is a great leveller. Play does not require a winner so therefore there are no losers. Let’s take Lego for example. You may not be the next Brickman but you can’t be “bad” at Lego which is why the use of Lego is so effective in problem-solving and innovation workshops. As a Lego Serious Play (LSP) facilitator, I enjoy seeing how using Lego helps solve problems and addresses the elephant in the room whilst also creating an environment that allows both executives and front-line staff to openly communicate with no judgement. With LSP your hands often do the thinking so the battle of brains and ego fades into the background and hierarchy has no bearing on the outcome. This helps increase the feeling of psychological safety because you can’t do Lego wrong. When you ask someone to build a tower with you in it the options are limitless. They could build a tower that has a figurine in it that represents themselves or they could build a tower where the tower itself represents the person. There is no right or wrong and that is a beautiful thing.

I was recently watching an episode of Bluey with my 5-year-old daughter and to be honest, I am not sure who likes the show more. In this particular episode, Bluey makes a friend whilst camping by the name of Jean-Luc who is French. The language barrier is quickly overcome through play which ultimately helps them capture the wild boar (Bluey’s dad Bandit.) Play is a vehicle that can break down all sorts of barriers, language, cultural, hierarchical, and more. Play, unlike fun, is not subjective. Play can be applied to attitude (playful) and play can be used as a tool to solve many challenges.

So, if you are thinking about a values revamp or feel you need a fun committee. Perhaps consider play as a value and maybe a play committee instead. Play might not have winners or losers but, play itself wins over fun every time when it comes to serious business.

Let’s play and find out.