Why is fairness such a powerful motivator? 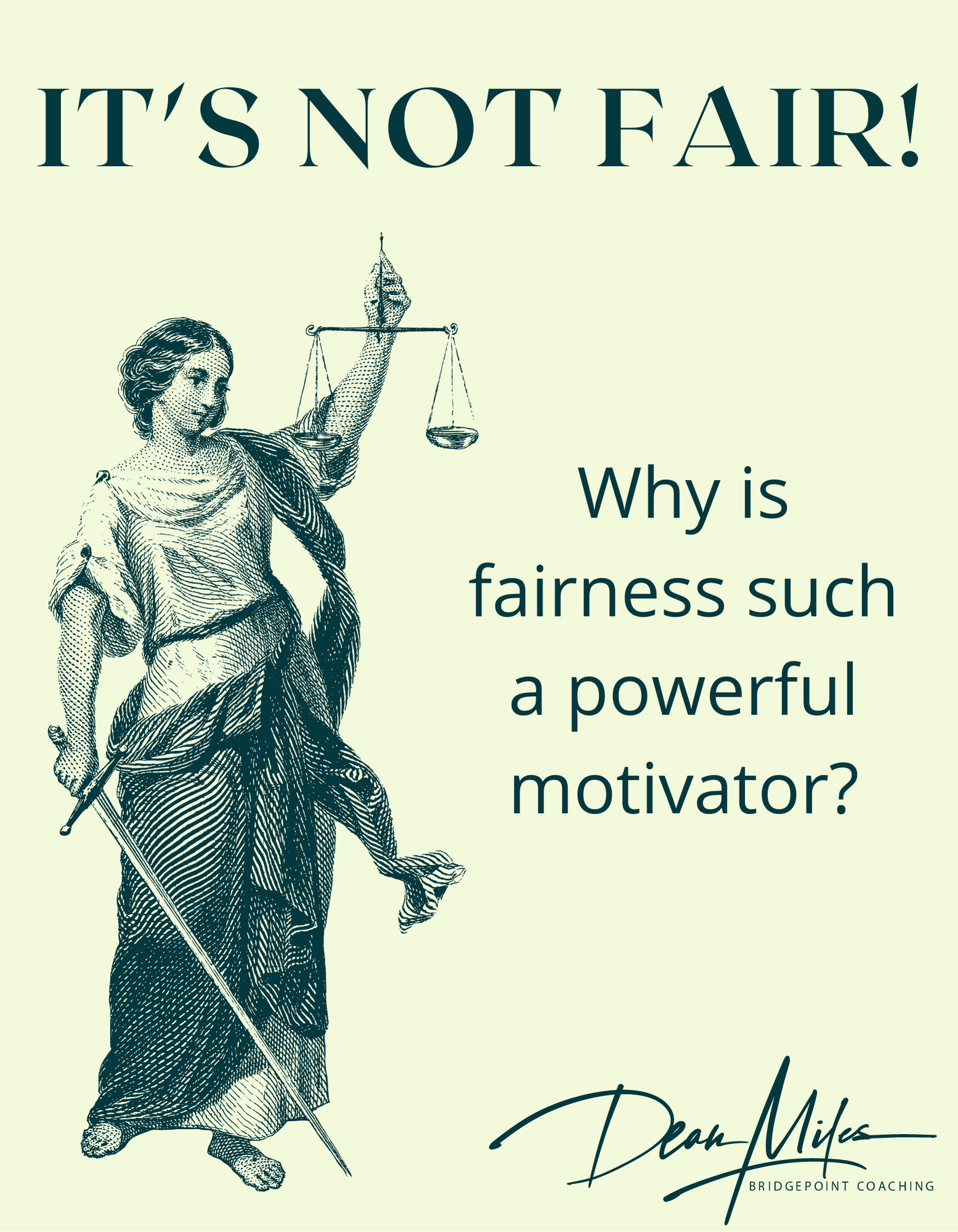 The psychological phenomenon of "it's not fair" is pretty interesting. Essentially, it's the human tendency to compare our own circumstances to others' and feel resentment when we perceive that someone else has it better than we do. This feeling of unfairness can be triggered by all sorts of things, from noticing that a coworker got a raise while we didn't, to seeing a friend post about their luxurious vacation on social media. And while the sentiment of "it's not fair" might seem trivial or petty, it can actually cause a lot of psychological distress. In some cases, it can even lead to depression or anxiety. So why do we feel this way? Well, scientists believe that it's evolutionary. In our hunter-gatherer days, feeling envy towards someone who had more food or resources than us meant that we were more likely to compete for those resources and improve our own chances of survival. While that instinct might not be as useful today, it's still hardwired into our brains.

What does this phrase actually mean? And why do we say it? One psychological explanation for "it's not fair" is that we have a fundamental need for fairness. We want to believe that the world is just and that people get what they deserve. When we see someone who doesn't seem to be playing by the rules, it bothers us. It goes against our sense of what is right and proper.

Another explanation is that we use "it's not fair" as a way of coping with feeling envy or jealousy. When we see someone who has something we want, it can trigger negative emotions. Saying "it's not fair" allows us to distance ourselves from those feelings and makes us feel better.

We all have those times at work when everything seems to be going wrong. The deadlines are looming, the workload is mounting, and our colleagues seem to be more interested in playing politics than actually getting the job done. In times like these, it's easy to feel like the world is against us. We might even start to feel like it's not fair.

But what does it mean when we say something is "not fair?" And more importantly, what role does justice play in our experience of work-related stress?

Recent research has shed some light on these questions. In a study published in the Journal of Applied Psychology, investigators examined the relationship between workplace stressors and job performance. They found that employees who perceived their work environment as being unjust were more likely to experience stress-related decreases in job performance. Importantly, though, this relationship was mediated by perceptions of leader support. In other words, employees who didn't feel supported by their leaders were more likely to see their work environment as being unfair – and this, in turn, was associated with poorer job performance.

Another study found that employees who experienced procedural justice – that is, who felt that their work environment was fair and just – were more likely to report higher job satisfaction and commitment, as well as better performance.

Interestingly, the study also found that leaders play a role in how employees perceive justice in the workplace. In particular, employees who felt supported by their leaders were more likely to perceive procedural justice, even when there were actual incidences of unfair treatment. This suggests that leaders play an important role in setting the tone for how employees experience justice – or lack thereof – in the workplace.

A new paper in the Journal for Business Ethics has suggested that a rethink might be required when it comes to leadership and change. The research, which was conducted with 100 French companies, showed that there is a strong correlation between those leaders who are able to inspire change and those with a reputation for fairness. The study's authors say that this finding " challenges the widely held belief that transactional leadership, focused on results at any cost, is the most effective way to lead in times of crisis and change." They go on to suggest that " inspirational leaders who are perceived as fair are more likely to be effective in mobilizing employees to achieve results in times of crisis and change."

Fairness is such a powerful motivator because it reveals how a person values us. When we are treated fairly, it shows that the other person sees us as equals. This is in contrast to being treated unfairly, which suggests that the other person believes they are better than us or that our opinions and rights don't matter. Treatment of this sort can be very demotivating, as it makes us feel devalued and unimportant. By contrast, fairness makes us feel valued and respected, motivating us to reciprocate these feelings. It's no wonder, then, that fairness is such an important part of our social interactions.

When it comes to motivation, people often think of things like money or recognition. However, there's one motivator that's even more powerful than these things: fairness. Fairness is so important because it reinforces our sense of justice. We all want to live in a world where people are treated fairly, and when we see unfairness, it can really upset us. That's why companies that are known for being fair to their employees tend to be more successful. Employees who feel like they're being treated fairly are more likely to be happy and productive. So if you're looking to create a motivated workforce, make sure you're promoting fairness.

Elevating Your Customer Experience With AI
Critical Thinking: The Key to Success in Any Field
Become a Contributor Newsletter Signup