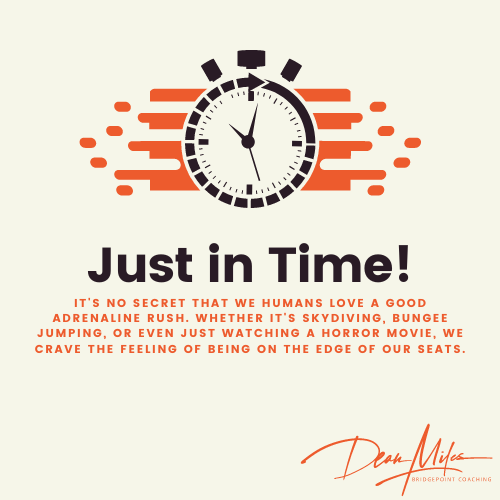 Maybe it's the satisfaction of knowing we worked right up until the last minute and still got the job done. Or maybe it's the rush of adrenaline that comes with completing something just under the wire. Whatever the reason, it seems that many of us crave the feeling of finishing a project just in time. Perhaps it stems from our time in school, when essays were due at the end of the period and projects were always due on Friday afternoon. Whatever the case may be, there's no denying that there's a certain appeal to finishing things at the last minute. Of course, it's not always ideal, and sometimes it can lead to subpar work. But there's just something about that sense of accomplishment that comes with completing a task at the eleventh hour.

People who procrastinate are often thought of as lazy or disorganized. But according to Anna Abramowski, a British psychologist who studied the construct of procrastination at Cambridge University, there may be another explanation. Abramowski argues that people who "actively procrastinate" display a certain level of self-reliance, autonomy and self-confidence. Active procrastinators are aware of the risks of waiting until the last minute, but they make the conscious decision to do so anyway. This type of behavior is often seen in creative fields, where individuals need to generate new ideas and solutions. In these cases, procrastination can actually be beneficial, as it can lead to more creative thinking. So the next time you find yourself putting off a task, think of it as an opportunity to be more innovative.

Many people find themselves struggling with procrastination at some point in their lives. While there is no one definitive cause of procrastination, there are a few suggested explanations. One theory is that it can be traced back to a strict upbringing, in which children learn that putting things off till the last minute is unacceptable. As they grow older, they may rebel against this by continuing to procrastinate. Another possibility is that procrastination is simply an inherited personality trait. Some people are naturally more laid back and less inclined to plan ahead, while others are more Type-A and thrive on meeting deadlines. Finally, it's also possible that procrastination stems from a fear of failure or even success. If someone is afraid of not being perfect, they may put off starting a project altogether, lest they have to confront their own shortcomings. Whatever the cause, procrastination is a common phenomenon that can be difficult to overcome.

We've all been there: we've taken on too much, over-committed ourselves, and then had to drop the ball somewhere. It's frustrating, and can feel like we're never going to get ahead. But it turns out, there's a reason we do this - it's called the planning fallacy. The planning fallacy is a cognitive bias that leads us to underestimate the time it will take to complete a task. We do this for all sorts of things, from personal projects to work deadlines. And while it might seem like we're just being optimistic, the reality is that this bias can lead us to overcommit to opportunities and then not be able to deliver on them. The next time you're considering taking on a new project, try to account for the planning fallacy. It might mean that you need to give yourself a little extra time.

With all this it's no secret that we humans love a good adrenaline rush. Whether it's skydiving, bungee jumping, or even just watching a horror movie, we crave the feeling of being on the edge of our seats. And according to some experts, this love of thrills is hardwired into our brains. In fact, it may even be what drives much of human achievement. After all, if we weren't constantly pushing ourselves to the limit, would we ever really progress? It's a pretty incredible thing when you think about it: the same instinct that propel us towards excitement and adventure is also what drives us to achieve great things. So the next time you're feeling the need for a little thrill, remember that you're in good company. We may be creatures of habit, but we're also creatures of innovation. And that's something to be celebrated.

DO YOU NEED A COMPUTER SCIENCE DEGREE TO BUILD CAREER IN DATA SCIENCE & AI?
Stepping Out of How Things Should Be
Become a Contributor Newsletter Signup